Study: Greater weight loss for low-carb dieters even when they consume more calories than low-fat dieters

By Alvin Powell
Harvard News Office
A Harvard School of Public Health study may stand dieting wisdom on its head, after low-carbohydrate dieters lost more weight than low-fat dieters despite eating 25,000 extra calories over a 12-week study period.
The findings generated national attention after Penelope Greene, a visiting scholar in the School of Public Health's Nutrition Department, presented her research last week (Oct. 13) at the annual meeting of the North American Association for the Study of Obesity, in Fort Lauderdale, Fla.
The study, conducted with Walter Willett, Nutrition Department chair and Fredrick Stare Professor of Epidemiology and Nutrition, put three groups of dieters on different regimens. They included a low-fat group, a low-carbohydrate group that ate the same number of calories, and a third group on a similar low-carbohydrate plan that included 300 extra calories a day.
Participants in all three groups lost weight, Greene said, with the low-fat group losing an average of 17 pounds and the low-carbohydrate group that ate the same number of calories losing 23 pounds. The biggest surprise, however, was that the low-carbohydrate dieters eating extra calories lost more than those on the low-fat diet. Participants in that low- carbohydrate group lost an average of 20 pounds.
While participants in that third group were apparently able to eat more and lose more weight, Greene cautioned that the study was just a pilot for the larger study she had planned from the start and that she is preparing now. As a pilot, the groups were relatively small, containing just seven participants each. That means that despite the raw numbers, statistically the three groups lost about the same amount.
But even that finding was notable because the higher-calorie, low-carbohydrate group was not expected to be the same as the other two. Conventional dietary wisdom indicates that the extra daily calories eaten by those in the third group - totaling 25,000 calories over the 12-week study - should equal about seven pounds, a difference that would have been statistically significant even in such small groups.
"That third group convinces me there's something there worthy of further study," Greene said.

Investigator in a chef's hat

The study was carefully controlled for what participants ate over the 12 weeks. Rather than giving participants a list of approved foods and quantities and setting them free, Greene had the food prepared fresh daily according to special recipes at a Cambridge restaurant, Ristorante Marino.
First Greene herself, then the restaurant's chefs, prepared meals from a meticulously crafted menu, and bagged them so participants could pick them up daily.
Each bag, color-coded and picked up in the early evening, contained that night's dinner, a snack, the next day's breakfast and lunch, and a multivitamin/mineral supplement.
Greene said she and Juniper Devecis, a registered dietician, spent considerable time before the study began creating the menu, trying out different dishes and different preparations of the same dishes. Her aim was to make the meals tasty and as similar as possible even though people were eating very different diets.
The result was that participants had similar meals throughout the study period, though portion sizes and preparation did vary.
Greene selected aging baby-boomers as participants because of concern about increasing health threats from obesity, diabetes, and cardiovascular disease as the boomers age.
"These people are over 50, overweight, and over-scared," Greene said. "They're hearing from their physicians that if they don't lose weight they're at high risk of having a heart attack or getting diabetes."
The result, she said, was a motivated group of 21 study subjects and an unusually high retention rate. Only one participant dropped out, and that happened early enough that a replacement was enrolled.
Subjects were randomly divided into three groups. The low-fat group ate diets that consisted of 55 percent carbohydrate, 30 percent fat, and 15 percent protein. The two low-carbohydrate groups ate diets of 5 percent carbohydrate, 30 percent protein, and 65 percent fat.
The low-fat group and one low-carbohydrate group ate diets limited to 1,500 calories for women and 1,800 calories for men. The second low-carbohydrate group ate diets of 1,800 calories for women and 2,100 calories for men.
Greene herself was extensively involved in the food preparation. Not only did she - with Devecis' help - design the menu, she also worked long days in the restaurant's kitchen in the study's first weeks preparing meals and training staff there.
As the chefs became familiar with the menu and aware of the need for meticulous accuracy in measuring ingredients and portions, Greene turned more and more of the preparation over to them. Even at this point, which she said came as a bit of a relief, she still conducted spot checks, tasting and weighing random portions to ensure the protocols were adhered to.
These lengths were needed, Greene said, to address potential failings, such as faulty memories and inexact portion sizes, in studies that rely on subjects self-reporting their diets.
A measure of her study's success, Greene said, is that all participants lost weight over the study period. The average loss amounted to two to three inches on their hip measurements and three to four inches on their waist measurements. The subjects asked to continue in the study even after the 12 weeks concluded, a request Greene had to decline.

Weighing in on 'low-carb'

Greene's interest in low-carbohydrate diets goes back to 1999. Intrigued by the diet's supporters' seemingly counterintuitive claims, she spent months researching previous studies after visiting the New York City clinic of Robert Atkins, one of the diet's main champions.
Staff there presented evidence culled from patient records over a recent 18-month period. While Greene felt the evidence of weight loss presented by the clinic was compelling, it didn't satisfy her, mainly because the records would naturally be skewed to include those patients who experienced success on the diet and thus stuck with it, rather than any who didn't and might have left the clinic.
Greene decided the best way to fill in the blanks between the Atkins data and the older studies she had reviewed was to conduct her own study and to provide the subjects with fresh food so she would know exactly what they ate.
"It seemed counterintuitive," Greene said. "How can you eat so much fat? The claim was that you can eat as much as you want as long as you keep the carbohydrates down."
Though Greene's study didn't allow low-carbohydrate dieters to eat all they wanted, it still provided extra calories for that third group that, somehow, didn't translate into extra weight.
While some have said her results defy laws of thermodynamics - since more calories should equal more weight, whatever the calories' source - Greene said the explanation is obviously more mundane.
It has already been shown that it takes more energy to metabolize protein than carbohydrate, Greene said, and that may provide a small part of the answer. Other possibilities are that the body may absorb less of what's eaten in a low-carbohydrate diet, which is high in protein and in fat. Whatever the answer, she said, she's sure the laws of physics still apply.
"I don't think for a minute that anything is violating the laws of thermodynamics," Greene said. "There's no 'smoke and mirrors' here."
alvin_powell@harvard.edu
Related stories: 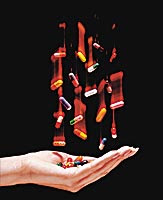